We suggest The Moorings Travel Service (from North America) but you are not required to use them.
They may be reached at 800.535.7289, or Soun Saysonvang, our Air Agent, her direct number is 866.649.2003.
Leave her a message if she is unavailable and she will return your call.
The Moorings and sister company Sunsail are part of Travelopia, a pioneer in the specialist travel sector. The Moorings Travel service works exclusively with charter boat guests and they are happy to give you a quote and can help arrange for students to travel together.

Below are a of sample travel plans.

If flying into Tortola, you fly into San Juan, Puerto Rico via jet and catch a regional airline to Tortola - BVI (airport code EIS).
The current primary carriers into Tortola are Cape Air and Seaborne from San Juan and and LIAT from St. Martin and Antigua. It is a short 40 minute flight from each to Tortola's Beef Island Airport.
American, Delta, and Jet Blue make frequent flights to San Juan from most major hubs in the USA. 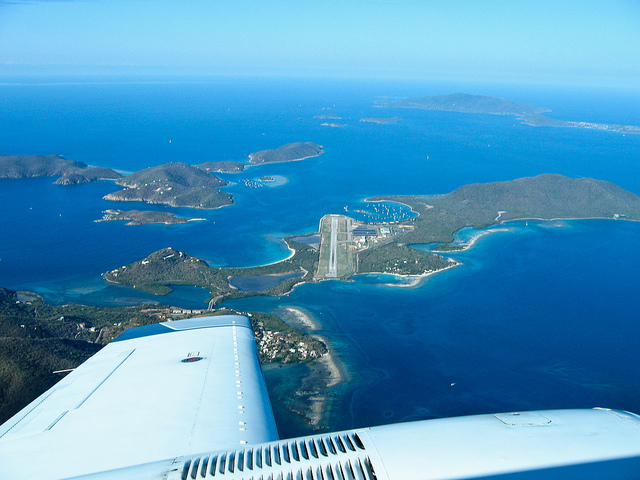 SEABORNE Airlines www.SeaborneAirlines.com and Cape Air Airlines www.capeair.com are code shared with the major airlines. The prices I have seen for the stand alone flight from San Juan range from $220 to $400 round trip.

Cape Air and Seaborne have multiple morning flights. Please consider leaving earlier rather than later as if there is a missed flight or delay (i.e. afternoon thunderstorms), having more time in the day is very beneficial to a smooth return home.


Below are links to current Travelocity Air Searches:

Alternatively, you can fly into St. Thomas - USVI (airport code STT), an Odyssey Expeditions staff member will meet you at the airport and escort you to the Charlotte Amalie ferry terminal ($12 taxi + $2 bag not included).
There are several ferry companies servicing Tortola.
The ferry ride is about 45 minutes and costs $40 each way (not included)
There is also a departure tax of $10 from the US and $20 from the BVI's and a $10 BVI arrival Environmenal Fee (not included).

You MUST arrive in St. Thomas by 3:35 pm to catch the ferry.
Your flight departure home from St. Thomas - USVI should not be before 11:30 am, in order to allow for ferry transport time, US Customs and taxi from ferry dock to airport. This option is generally lower cost than flying to Tortola from San Juan and easier IF you can get there by 3:35 pm.

Below are links to current Travelocity Air Searches:

Traveling to the voyages in Windward Islands and Grenadines info: Windward Transportation (pdf)

Below are links to current Travelocity Air Searches:

Learn to Dive and Sail - No Experience Necessary